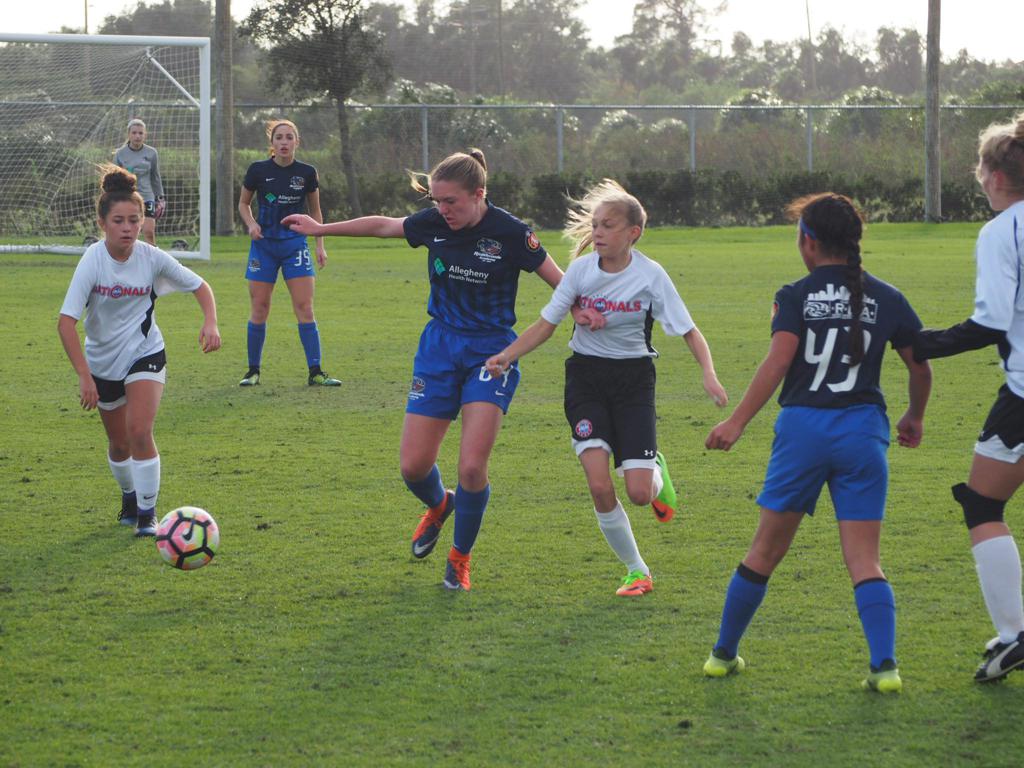 BRADENTON, Fla. – The Pittsburgh Riverhounds used a fast start to carry themselves to a big 5-1 win over Nationals in their U13 Girls match at the Super Y Finals at IMG Academy on Saturday afternoon.

Only a stunning save in the 11th minute kept Nationals off the score sheet after an impressive shot from distance. That shot looked destined to hit the back of the net but Jordan Spozarski reached up high and made the save, keeping it scoreless.

The second shot from distance had a different result as the Pittsburgh Riverhounds opened the scoring from a powerful long shot. McKenzie Dupre looked up after receiving the ball just outside the box and shot over the keeper.

Moments later the Riverhounds doubled their lead as Sydney Gray was able to break through the defense and shot past the keeper, into the back of the net to make it 2-0.

A long run from Kendall Walton made it three for the Riverhounds, as she cut past three defenders into the box. Walton was able to create the space with the run, shooting across the face of goal out of the reach of the keeper for the third.

Nationals pulled a goal  back in the 31st minute after some strong passing opened up some space at the top of the box. Kiera Bosovich was the benefactor, finding space and the hitting a shot perfectly out of the reach of the keeper.

It was tight in the second half, with both sides having enough possession to be dangerous but the defense was strong, keeping things at 3-1 until the 56th minute. Fiona Mahan received the ball outside the box and then chipped the ball mover the top of the keeper to seal the match.

Yet again it was a quick turn around two minutes after the goal as the Riverhounds doubled up to extend their lead out to four. Alayshja Bable was the scorer on this occasion, taking advantage of good work from her team mates to score with another well placed shot.