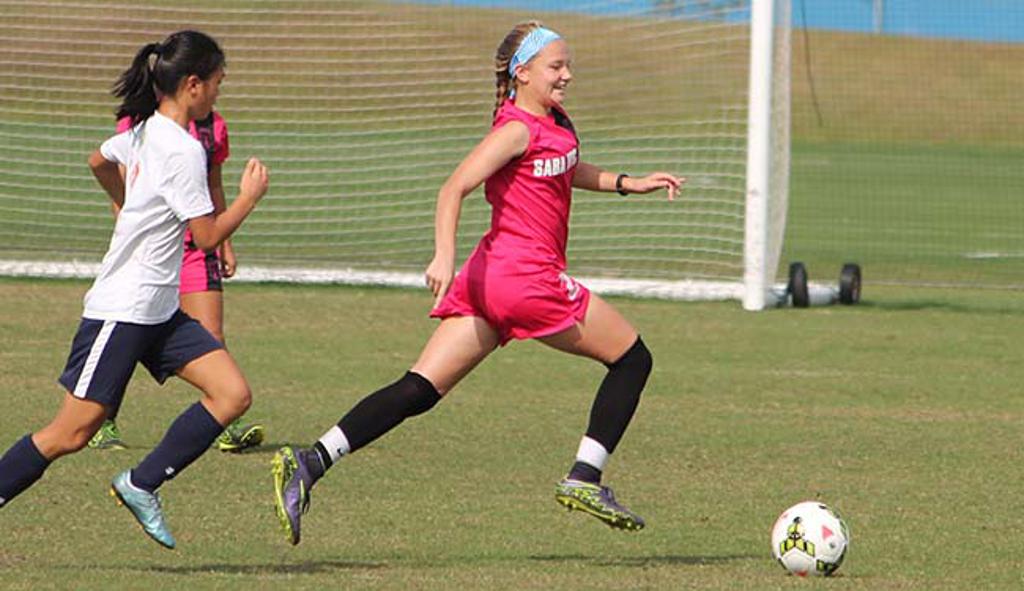 BRADENTON, Fla. – As she came toward the sideline, having already bagged a hat trick and assisted on another goal in SABA NYC’s 5-0 victory against the DDYSC Wolves in the semifinals of the Girls U13 Division at the 2015 SYL North American Finals, Kayleigh Goodrich had only one question.

“Can I go in again?” she asked as she made her way toward the bench?

Goodrich got her wish, stepping in at center back as SAWA rounded out its victory. On Tuesday, it will get the chance to complete a perfect week at IMG Academy as it faces the Long Island Rough Riders for the championship.

“That’s the type of player she is, you know?” said Triana. “She’s always ready to play, and so coachable, and the other girls as well. When they’re on the side, it’s natural, it’s not forced by us, and it’s great to see it’s all coming together.”

While Goodrich has been the central point on the axis for SABA, then entire squad has shone in advancing this far. The side has scored 15 goals, and conceded just once on its way to the championship game. For a side that is relatively new, according to Triana an amalgam of two previous groups, the chemistry in the group appears solid both on and off the field.

“We haven’t been together very long, but it feels like we have,” Goodrich said. “There’s groups of teams together in this team, but we just clicked once we got on the field.”

Goodrich is definitely pleased to have been able to contribute to the side’s success.

“It’s been good,” she said. “It’s good getting touches on the ball because I need to work on things. I’m happy that I’ve scored a lot of goals, and I’m excited to score more.”

“When you have a player like that, you want to find her in those little pockets,” Triana said. “She creates space for herself well. Her runs once she gets the ball at her feet, she’s fantastic. It’s great to have a good nucleus around her. It frees her up a bit so she can find the right areas to get into and then create opportunities for us, whether she’s scoring or whether she’s creating with passes through the seams and all the great stuff that she does.”

As well as SABA has played, though, its biggest challenge awaits in the form of a Rough Riders side that handed SABA its only loss in the regular season. With the side playing as well as it has this week, though, Goodrich and her teammates are hoping they’ll be the ones lifting the trophy.

“This is where we wanted to be. We told them, let’s take the process step by step, game by game, and now we’ve got something to play for,” Triana said. “I told them today, just visualize success, visualize raising that trophy, because now we want to do everything possible to get that result. It’s not going to be easy. Any team that we face will be quality, but we hope for the best. We hope they can continue this momentum.”

LONG ISLAND ROUGH RIDERS 2, INTERNATIONALS SC 0: Devon Olive and Alyssa Anton both scored in the second half to lead the Rough Riders to a victory to earn a chance to complete an undefeated regular season and North American Finals on Tuesday.

GIRLS U12
ATLANTA FIRE UNITED 3, INTERNATIONALS SC 0: Atlanta got goals from three different players as it cruised into the U12 final. Morgan Amrozowicz, Kendall Page and Larsyn Reid all found the net, while Kyleigh Drew and Jordan Monica had assists for United.

WAZA FC EAST 5, FLORIDA ELITE SOCCER ACADEMY 0: Faith Webber had a hat trick and an assist to lead Waza into the final with their fourth consecutive victory. Meike Ingles also added a goal and two assists, while Maddy Von Moeller had a goal and assist as Waza pulled away with four second-half goals.