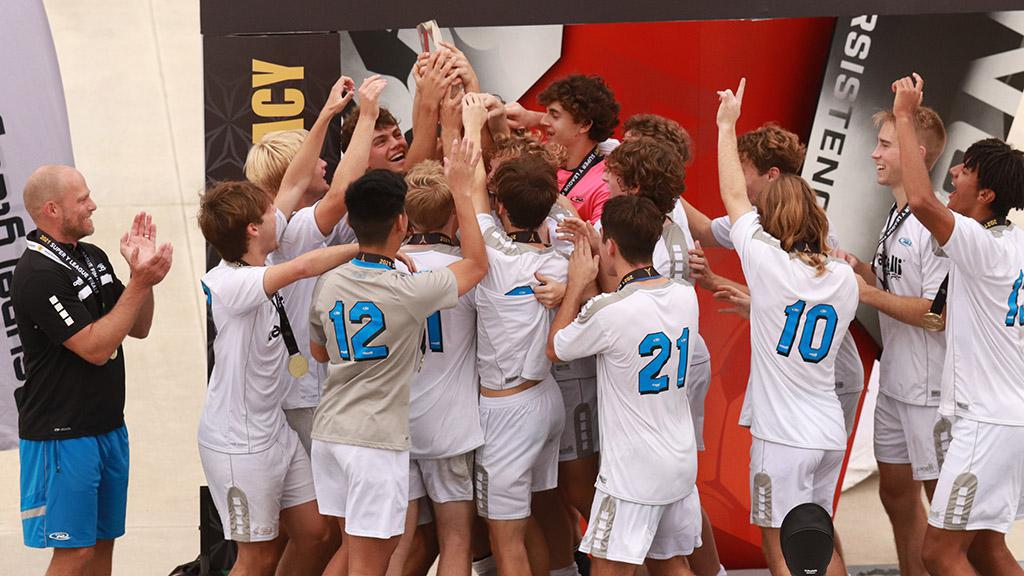 TAMPA, Fla. – The Super Y League Finals came to a conclusion at the Tournament Sportsplex Of Tampa Bay on Tuesday afternoon as a packed week of action saw six champions crowned across the boys divisions, featuring some standout individual performances to lead their respective sides to victory to wrap up the 2021 season.

Ben Burns recorded a hat trick to cap a standout tournament as Chicago Rush SC claimed the Boys U-18/19 title against the Westchester Flames. Burns was ably backed by Jack Walsh, who recorded the assists on all three of his goals while Westchester found the net through Felipe Remon but ended the game with 10 players after Gianluca Ruggiero was sent off after a second yellow card. Burns’ performance in the final moved him to eight goals in five games, accounting for half of the side’s 16 goals overall at the tournament.

Four different players found the net as Ironbound SC pulled away from Manhattan SC to earn the Boys U-16/17 title and wrap up an undefeated run through the tournament that saw the side concede only three times in five games. Gabriel Baretto and Darius Holmes set Ironbound on their way in the final before substitutes Johan Nieto-Baez and Juanes Ramos also found the net as the side held Manhattan’s attacking duo of Hakim Karamoko (9 goals) and William Lulka (7 goals) off the scoreboard.

Noah Hill recorded a pair of goals to lead West Side Alliance to victory against Arlington SA to claim the Boys U-15 title. Jovanni Arreland also found the net for WSA, while Gabriel Lloyd and Luis Ortiz notched assists as the side completed a perfect run through the tournament with five victories out of five, having also taken a 3-1 win against Ironbound SC in the Semifinals on Monday afternoon.

Kyle Nadler scored the only goal of the game as Evolution took victory against Ironbound SC to take the Boys U-14 title. The meeting between the sides was their second of the event after having finished all square in the opening game of the group stage, but after Evolution took a 3-1 victory against Nationals Union Red in the semifinals, Nadler’s goal off an assist by Kevin Beltran proved the difference as the side’s defense held out Ironbound’s attack.

Malik Jakupovic and Rivaldo Nona each scored twice while Nona also notched an assist to lead Nationals Oakland Black to the title in the Boys U-13 Final against Liverpool FC - Michigan Central Academy. Having come through a rematch of its group stage contest against Wild Card Indiana Elite FC in the Semifinals with a 2-1 win, Jakupovic and Nona paved the way to victory in the final as Drake Ellis also picked up an assist for the side. Jakupovic’s performance saw him end the tournament with nine goals across five games as well as a pair of assists.

Nationals Oakland Black got goals by Jacob Copeland and Connor Hotts to earn victory against Midwest United FC and claim the Boys U-12 title. Oakland’s victory completed a perfect run through the tournament that saw the side record 18 goals across its five games, with Copeland’s tally in the final his sixth individually of the tournament to finish level with Midwest’s Karlo Santillanes for the age-group lead. Brayden Angle also notched an assist for the victors, which had also made a perfect run through its regular season to advance to the Finals.